The Coach and Horses at Butchers Race goes back to the battle of Neville’s Cross. When a detachment of English Cavalry spotted a number of Scottish and French foot soldiers who were spying in the enemy lines.

The Cavalry chased the soldiers to the site where the pub now stands and butchered them, hence the name “Butchers Race”.

The pub itself originated in 1590 when a farmer names Hutchinson began to brew his own ale. His popular mead was a sweet ale and required honey for its brewing. Therefore our original name was “The Beehive”.

However in 1801 The Beehive became a popular stop for many a traveller and the name was changed appropriately to the Coach & Horses.

Today the Coach & Horses prides itself in good, quality food and
welcomes all travellers. 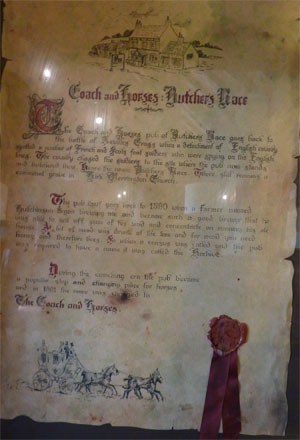